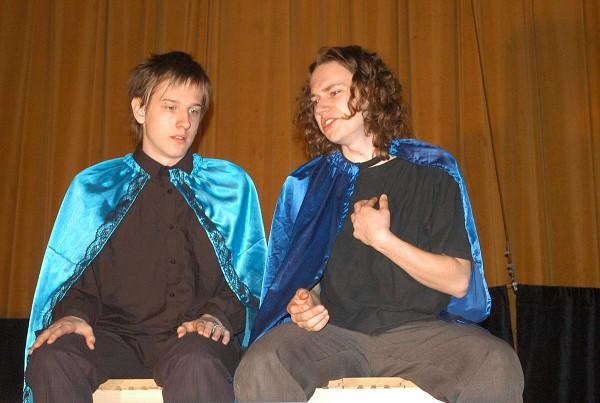 I don't like drama, but I think that this one was okay. It passed really fast, maybe too much fast and music wasn't good. When I must choose one of the best dramatic performances of this play, I think that the best actor was Julie's father. Maybe next time I would like to go again.

On Monday on 26th September many of my classmates and me visited a Shakespeare’s drama Romeo and Juliet performed by students of the drama club in the Centre of leisure time Korunka in Ostrava-Mariánské hory. The Theatrical play was approached in a modern way with great music that formed an unforgettable impression. The audience liked the drama and  they forgave a few actors’ mistakes.

On Monday on 26th September we were in the theatre to see the performance about Romeo and Juliet. The actors were in our age and some of us know their faces from the dancing lessons. It wasn’t long and the music was good too. I think it was a very nice performance.

On 26th September, our school visited students performance Romeo and Juliet. We could see famous scenes of Shakespeare’s tragedy. Because it was acted by students, we understood their English very well. We liked the atmosphere of the performance.

Repetition is the mother of study, so even though most of us have already seen Romeo and Juliet in five different versions, we were really excited to see this one, performed by students of the Gymnázium Olgy Havlové. Some of us had an opportunity to see their previous performance of A Midsummer Night's Dream, and I must say that we all had a great time watching it.

They made an hour's version of the whole story and used an understandable language, which was refreshing. I think they dealt with "the biggest drama ever written" really well and gave to some scenes a new dimension. To be specific, the scenes of Juliet's furious and yelling father and Romeo and Juliet's last time spending together (alive) were absolutely great, one of my friend even shed a tear.

It’s nice to see what a group of schoolmates can do if they want, just like that. I appreciate that and I would like to see them performing again.

In my opinion the theatre was good. I have to pay a tribute to the actors, that they could play it practically with nothing. I think it's good, that it wasn't so serious, because I could more enjoy it. And finally, I can remember the plot, as well! I also appreciate the music; it was my cup of tea :)

Romeo and Juliet is a classical Shakespeare’s tragedy, which was played for million times by actors all over the world. The students from the Olga Havlová secondary school decided to rehearse this drama too, and we had a possibility to see it. The whole performance was in English. Somebody’s talent and English pronunciation were better, somebody’s worse, but we shouldn’t criticize them too much, because it is really difficult to play in a foreign language and for students in the same age. Anyway, I really liked some original art elements such as two colours of their suits (it was good for the orientation between the Capulets and the Montagues), the scene with a red ribbon or the people with masks, who helped to describe the whole atmosphere. The drama took one hour and I think we spent a good time there.

I will not say that I liked it nor disliked it. It was just fine. Surely they invested a lot of time and energy to prepare this performance for us. The music was splendid and so were the actors. I really enjoyed the scene where Juliet drank the elixir in order to fake death and she was surrounded by people in capes. It literally embraced me with strong impression. Long story short it was surely not wasted time and I am looking forward to seeing another theatre play.